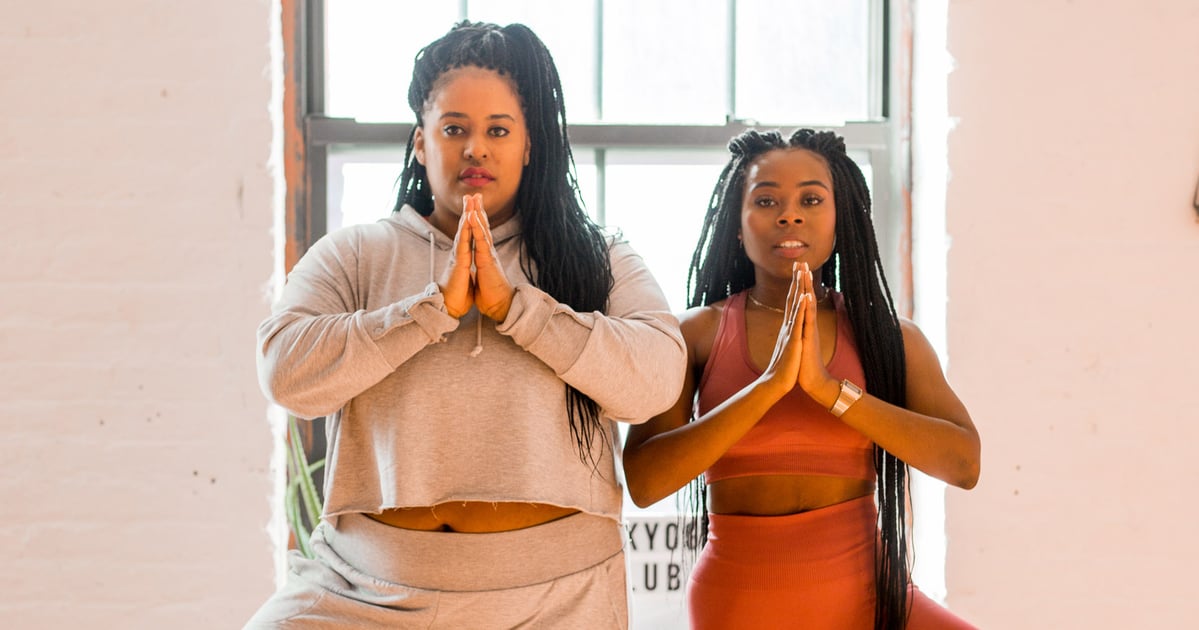 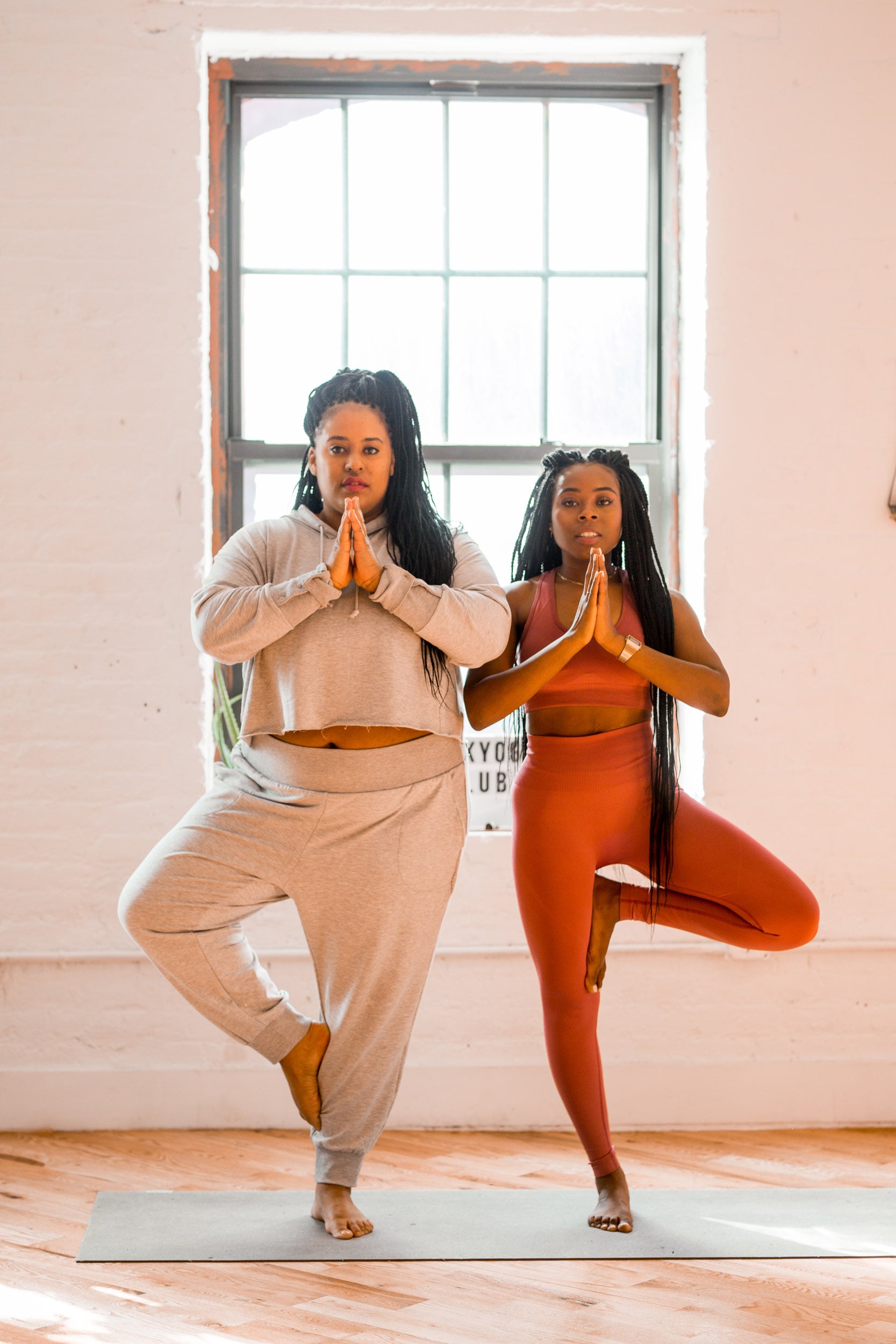 Paris Alexandra and Alicia Ferguson, the founders of New York City’s inclusive, body-positive BK Yoga Club, first met in yoga teacher training. For both, it was an important stop on their wellness journeys. Ferguson originally saw yoga as a once-in-while escape from a crowded apartment and a hectic college life, but fully recommitted to it years later after her grandmother passed away. “If I don’t hate it at the end of the six months, and I do it every day, I’ll just do yoga teacher training,” she told herself. “I’ll go for it.”

Alexandra was coming from a dance and running background when she discovered yoga. She loved the practice, but ended up dropping out of her first round of yoga instructor training. Part of it was that she was young, Alexandra told POPSUGAR, but “the other part was that I wasn’t represented. I felt like the only Black woman in the room.” She felt unseen, she said, but didn’t have the language to address it.

“In 2018 I decided, I’m going to take up space for myself. I know I’m not the only larger-bodied woman out here that practices yoga,” she said. She went into training with the goal of working with Black and brown women in larger bodies.

Looking For Representation in Yoga

That vision resonated with Ferguson, who recalled that out of twenty-some people in their training group, she and Alexandra were the only Black women. The obvious lack of diversity was reflective of the larger yoga and wellness field, she said. “That’s what drew us together: that representation piece,” Ferguson explained. “That was at the forefront of what we wanted to do.” The mainstream, stereotypical image of yoga has always been clear, Alexandra went on. “We knew that we wanted to see ourselves represented, and that others wanted to see themselves represented, in the wellness and yoga space.”

Over more conversations, their idea coalesced: they wanted to start their own yoga studio centered around creativity, community, and above all, inclusivity. “We wanted it to be clear that when it comes to culture, race, gender, sexuality, you get to be the full expression of who you are in the space, as long as it’s not hurting or oppressing anyone,” Alexandra said. They envisioned the studio as a home away from home, where any person of any background could feel comfortable and seen.

Alexandra and Ferguson took studio space in Brooklyn, first subletting and then getting their own studio as their classes grew in popularity. “It was beautiful,” Ferguson said. “We had people from the Bronx and Harlem coming, people from Jersey.” Visitors from out of town would find BK Yoga Club online and stop by on trips to New York. “They wanted to come and experience what we were cultivating here,” Ferguson explained.

In classes, that means meeting people where they are, Alexandra said. Teachers don’t label students or assume skill levels based on how they look, and offer a variety of poses and movements to make classes accessible. Ferguson said her classes also prioritize the joy in the practice. “Yoga is supposed to be fun!” she said. “We get anxiety on the mat because we’re too worried about what we’re doing. It should be the opposite.” At the forefront of their body-positive classes is “healthy habit-building,” Ferguson said, with a focus on how the practice feels instead of how it looks.

The Future of BK Yoga Club

The next step for BK Yoga Club: grow. Alexandra and Ferguson aim to expand into multiple locations, create an app, and broaden BK Yoga Club into a bigger wellness brand. “BK Yoga Club is beyond just yoga,” Ferguson explained; from the start, they wanted to create an artistic, inclusive, and wellness-focused community. The studio has hosted artistic events and therapist-led support groups, both in person and now online. They had planned a Costa Rica wellness retreat this year that’s now gone virtual, called Recess. “It focuses on cultivating joy, the idea of play as a form of rest and relaxation,” Ferguson explained. Besides yoga, it’s set to include a West African dance class with a live DJ, an essential oil workshop, and a soundbowl meditation, plus a panel on career goals and a discussion on mental health. Meanwhile, they’ve continued to host Zoom yoga classes throughout the pandemic.

“It looks different than what we initially thought, but we’re still holding on to the vision of global impact,” Ferguson said. “We’re seeing it happen in front of us, right now. I think that’s amazing.”

Twitter Is Dragging Kylie Jenner for Her Huge Luxury Shower’s Low Water Pressure
We’re Already Rooting For Brooklyn’s Fearless Youth Football Team in This Netflix Trailer
President Donald Trump Was Just Impeached, Again
WandaVision Is Marvel’s First Real Mystery. We Ranked All the Theories About What Could Happen Next.
Simone Rocha Is Bringing Her Magical Touch to H&M