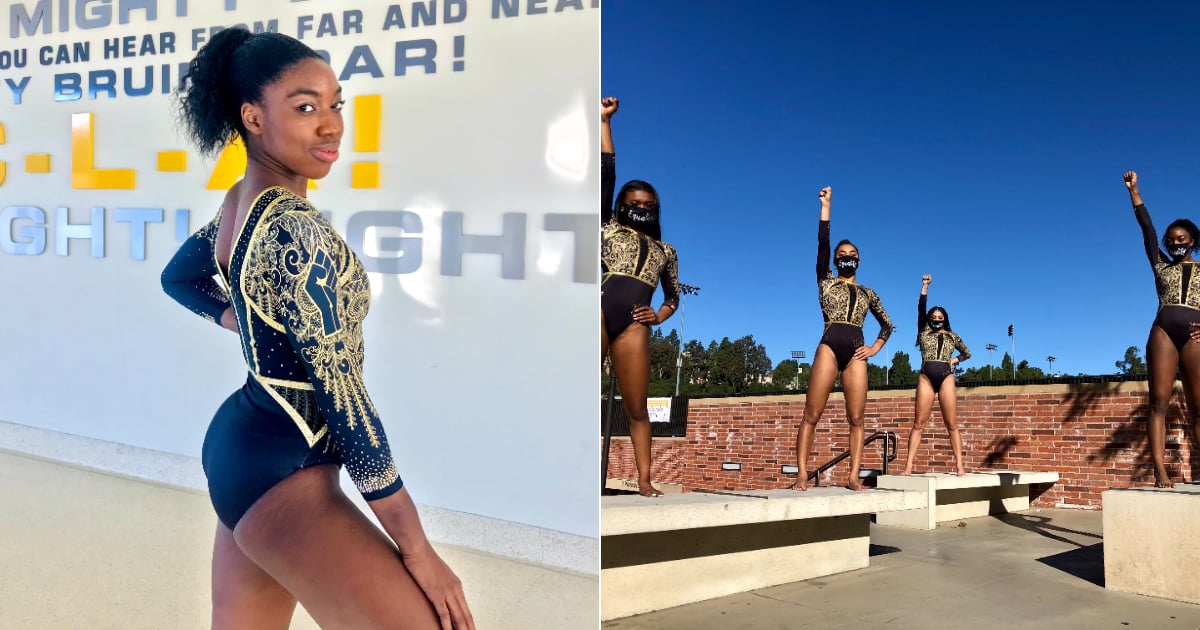 This month, the gymnastics team from the University of Pittsburgh debuted a leotard with “BLM” bejeweled down the sleeve at a competition against Temple University that they declared a “Until We Unite” meet. In that same vein, UCLA gymnastics will be hosting a Feb. 27 meet against Oregon State called the “Black Excellence” competition — and they are debuting a special leotard that represents their commitment to social justice and equality.

The gorgeous black and gold leotard (or “leo” for short) has a raised fist on one arm, and it was created in collaboration between UCLA associate head coach Kristina Comforte, leotard company Sylvia P, and the team’s four Black gymnasts: senior Nia Dennis, juniors Margzetta Frazier and Sekai Wright, and freshman Chae Campbell.

Comforte, who competed for UCLA gymnastics from 2006 to 2008 and is in her second season as associate head coach, told POPSUGAR that the unique design concept, inspired in part by the lace and piping of a wedding dress, began to take shape last summer. The leotard was originally going to be all blue, but after further discussions, Comforte and the athletes decided black and gold was most appropriate.

As for a symbol of equality, they were choosing between something similar to the “Stand Together” patch the gymnasts already wear on their warmup jackets and that raised fist. They ultimately went with the latter. “In consulting with Margzetta, Sekai, Nia and Chae, we all decided that the fist was just more powerful, and it worked with the leotard much better,” Comforte said.

UCLA gymnasts usually change up their leotards every competition — though Comforte said there should be a few repeats this season. Frazier stated during a media call that having the four Black gymnasts on the team, herself included, weigh in on the leotard’s design was vital. “I’m glad that we did speak about the leo, and that we were able to make adjustments and make it what it is now, which is probably the most beautiful leotard I’ve ever seen.”

“Being in a black and gold leo as a group of powerful women, you can’t not feel like you’re about to take over the world.”

Frazier further told POPSUGAR, “I think it’s perfect and it’s beautiful and it’s regal and it’s elegant. And I feel very proud and honored to wear such a special leo for the first time. When we are all in that leo, we just feel nothing but power. Being in a black and gold leo as a group of powerful women, you can’t not feel like you’re about to take over the world.”

Dennis said during a media call that it means the world to her to have an entire competition dedicated to Black excellence, and she added that wearing that symbolic fist is a powerful statement to make. “I think it’s really important to take time to acknowledge the movement that we’re supporting, the Black Lives Matter movement,” she said.

At the Black excellence competition on Saturday, Feb. 27, you’ll see masks with “equality” spelled out on the front and shirts that read, “Black Lives Matter,” as well as full black attire from the coaching staff and everyone involved, according to Comforte. UCLA’s Black excellence meet will be televised live on Pac-12 Network at 11 am PT / 2 pm ET.

In a video posted to social media, the UCLA gymnastics team explain what Black excellence means to them leading up to Saturday’s competition. Watch that video and see more images of their stunning, statement-making leotard ahead.

A New Collection from Vancouver-based Label Lezé Meets the Moment
4 BIPOC-Owned Fragrance Brands Who Are Creating Change in the Perfume Industry
What’s the Deal with Lil Nas X’s Satan Shoes and the Nike Lawsuit Against Them?
Corinne Foxx on Growing Up With an Anxiety Disorder: “My Heart Was Beating Out of My Chest”
Inspo Alert! Why We Love the Wild Style of Nick Haramis & Misha Kahn