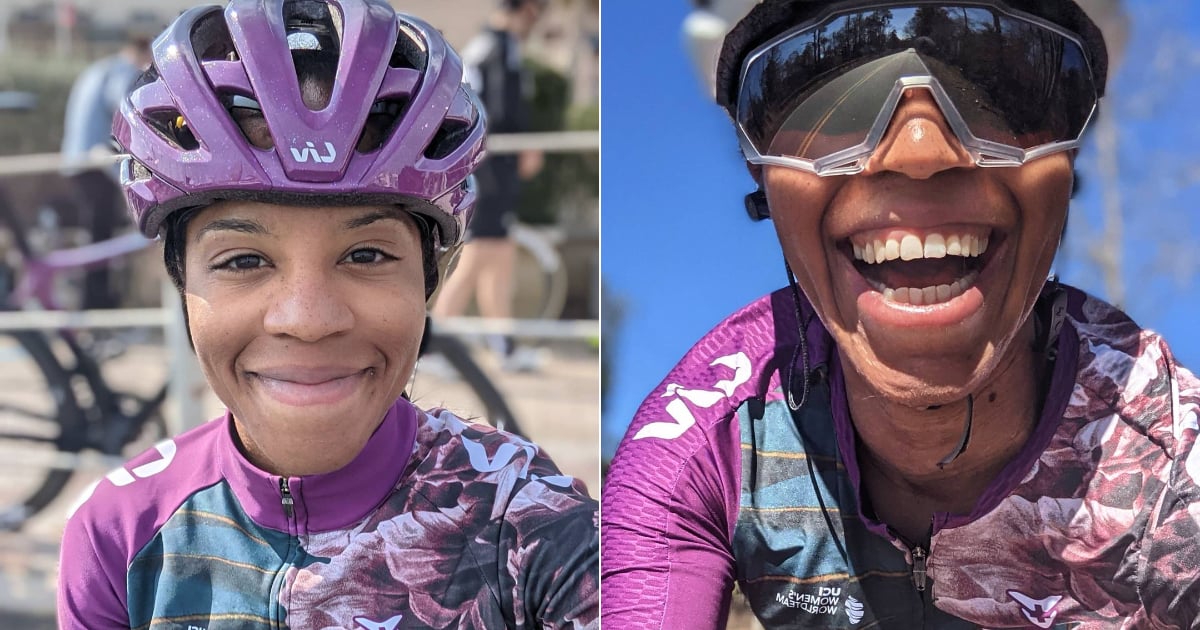 Professional cyclist Ayesha Rosena Anna McGowan, creator of A Quick Brown Fox, started out riding a bike like most kids. “I got two bikes for Christmas when I was five, one from my parents, one from my grandparents. I taught myself how to ride and rode as a kid just for fun,” she told POPSUGAR. “It wasn’t anything like sports directives were driven or specific. It was just me being a kid, having a good time on a bike.” In fact, unlike many of her competitors, she didn’t dip her toes into street racing until college and the years after when she worked as a bike messenger and biked to cut back on her commute time.

When she moved to Brooklyn, McGowan joined WE Bike NYC, a volunteer-run organization open to women, female identifying, and gender nonconforming people who enjoy biking with the goal of breaking down barriers to cycling and build community. Soon after, she decided to get more serious about road racing.

Now, McGowan rides for Liv Racing and is the first Black American woman on a professional road cycling team. She uses her platform to advocate for BIPOC cyclists and those who are interested in racing and amplify the message that representation matters.

“I think the focus that I’ve had so far is getting the cycling industry to acknowledge that there’s a lack of representation,” she said. “So it’s been a slow process in my opinion, but a process of educating people enough to have the basic conversations that are necessary to first acknowledge that there needs to be more representation in cycling in the outdoor industry.” She added that the cycling industry needs to not only acknowledge the problem, but have the difficult conversations on how to move forward and what the possible solutions could be.

“When you’re talking about matters of representation and diversity, equity, justice, all of those things, you have to talk about white supremacy,” she explained. “And that’s a really challenging concept for a lot of white folks to understand, because it feels like an attack, right?” McGowan said she spends a lot of her work dispelling the idea that acknowledging white supremacy is an attack on white folks. Rather, she explained that it’s part of how our society is structured. “In order for us to progress, we have to acknowledge that [white supremacy] exists and then figure out how to dismantle it, and be willing to dismiss it. I think that’s more of it is the problem, the willingness to want to dismantle it.”

After the murder of George Floyd, McGown noticed that a lot more people were aware of white supremacy and its impact, and while some people were receptive to that conversation, others pushed back. “It’s just a matter of trying to meet people where they are and understanding that as a society, we are all in very different places.”

“I wanted to create a celebration of that joy of the things that keep us here, because we’re not here to educate white people to be better white people, we’re here because we actually enjoy riding bikes or being in the outdoors.”

After Floyd’s murder, McGowan said a lot of white people and companies, industries, and corporations reached out to people of color to be on panels and write pieces. “It was always about struggle and trauma and really sad, oppressive things,” she said. “And these are things that we are constantly experiencing, but no one really ever asks us to talk about the joyful things, the things that make us happy.” This is why she created Thee Abundance Summit, a free two-day event streaming live on YouTube March 26 and 27 that focuses on Black and brown joy in cycling and the outdoors. The event features fun and informative sessions such as picking out your first bike, story telling on Instagram, and self-care in the outdoors.

“Being a part of cycling and the outdoor industry is a choice that we’ve made because we enjoy some part of it,” McGown said. “I wanted to create a celebration of that joy of the things that keep us here, because we’re not here to educate white people to be better white people, we’re here because we actually enjoy riding bikes or being in the outdoors. I wanted to have a space that was all about that. And so the concept is that it is by us, for us, about us, and anybody can join and watch and participate. But the focus isn’t putting our trauma on display, the focus is celebrating and celebrating each other.”

McGown noted that she just wants people to have a good time. While she thinks the summit will be productive by nature, that’s not the priority. “In my head, it’s just like a big family reunion type celebration of all of the amazing things that we are doing in the outdoors,” McGown explained. “And there’s so many incredible people doing awesome things that aren’t about struggle and aren’t about oppression, and I want to highlight that.” She added that she wanted to elevate the voices of her friends since there aren’t enough people of color represented in cycling. She’s also highlighting youth in cycling, since they are the future of the sport.

“I want to make those voices louder and broadcast that signal so people can know, other people of color can know that they’re not alone and that this is space for us,” she said. “We belong and it’s really awesome.”

Although Thee Abundance Summit is free, participants are encouraged to donate to the summit’s mini grant program to create pathways for other women of color to break into or advance their careers in road racing and “strive for more, if that’s what they want.” The recipients of the grant get entry and support for Tour of America’s Dairyland (TOAD), which is planned to take place in June if it’s deemed safe amid the pandemic. The event is 11 days of shorter circuit races throughout Southeast Wisconsin, and it’s the largest competitive road cycling series in the nation for amateurs and professionals. McGown said TOAD is a good opportunity to gain experience with other cyclists who are dedicated.

Since McGowan has served as a role model for up-and-coming cyclists of color in the sport, what advice does she have for people who are thinking about road racing? “Go for it,” she said. “Enter at a point that is comfortable for you. You don’t need all of the fancy equipment right away. Just get a functional, safe bike and a helmet.” She emphasized if you like it, keep doing it. Once you find your community, MocGowan said you learn more about the sport and about yourself as a cyclist.

“There’s just so many different ways that you can enjoy bikes,” she explained. “It’s not just road bikes or mountain bikes or commuting bikes. I wish more people knew about the different entry points, which is kind of the point of the summit. So just get started and I feel like you’ll figure out the rest of you as you go along.”

The Founders of Atelier Cologne on Genderless Fragrance + How to Shop for Scents Online
Is Khloé Kardashian a Victim of Unattainable Beauty Standards — or Part of the Problem?
The 2021 CAFA Awards Will Be Virtual — Plus, This Year’s Host
This Body-Positive TikToker Wants You to Know You’re Worthy at Every Size
Canadian Gossip Girl Star Jordan Alexander Is Something to Talk About